What are Accelerated Payment Notices and how might you be affected?

The UK government is sending out thousands of Accelerated Payment Notices (APNs) to individual taxpayers and businesses in an attempt to reclaim ‘lost’ tax. Free Debt Report

Even taxpayers who believed they were members of legitimate schemes registered under DOTAS (Disclosure of Tax Avoidance Schemes), now face demands for payment within 90 days of receipt.

The DOTAS system was originally set up so that HMRC would be aware when new tax avoidance schemes were introduced, and object if they deemed it necessary. From February 2016, however, DOTAS rules and regulations have been significantly broadened and HMRC are sparing no time in contacting those brought under their expansive spotlight.

With NO right of appeal, individuals and businesses are experiencing financial hardship and being pushed further into debt. Those in more than one scheme may receive multiple notices that cover every year of membership for individual schemes, as well as each type of tax. 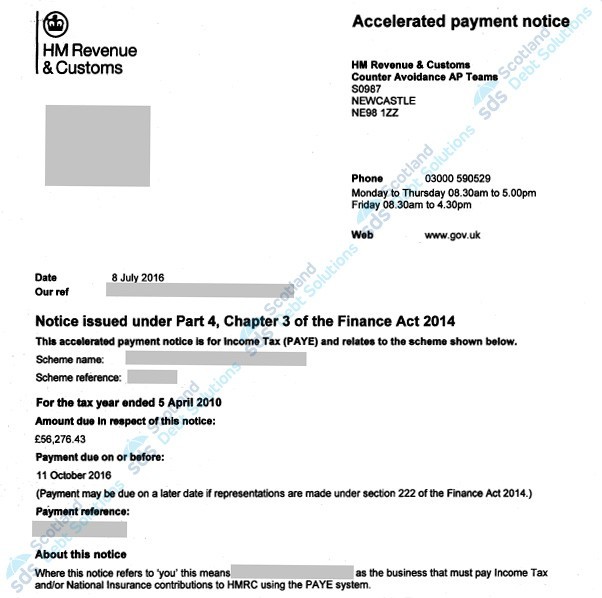 When can HMRC send out an APN?

If a tax or National Insurance enquiry relating to a scheme registered under DOTAS is ongoing, HMRC may issue an APN if they also send the recipient a Follower Notice. This compels the taxpayer to amend their tax return in favour of HMRC when they have been successful in taking legal action against a user of the same scheme.

Follower Notices are designed to deter membership of tax avoidance schemes, and you could face a penalty equivalent to 50% of the tax that is due if you fail to comply.

If you receive an Accelerated Payment Notice

A heavy-handed approach by HMRC leaves you with no recourse to appeal, apart from making written representations in respect to technical details, such as the amount of tax quoted. If this fails, you are given a further 30 days in which to pay.

HMRC publishes a list of scheme reference numbers they are targeting, and this is updated on a quarterly basis. Once a final judicial ruling is made in their favour, Follower Notices and APNs are issued to users of the scheme.

In some cases ‘class actions’ may provide a method of appeal, with groups of taxpayers taking collective action and sharing the costs accordingly. HMRC also offer settlement opportunities in some instances, which might be an appropriate route for certain scheme users.

Accelerated Payment Notices are causing financial hardship across Scotland and the rest of the UK. The short time period in which to make this payment of tax could mean the start of a decline into unmanageable debt, and eventually sequestration.

HMRC have stated an intention to issue around 64,000 notices by the end of 2016, and although there is no official recourse for payment in instalments in relation to these notices, it may be possible to negotiate a Time to Pay Arrangement in some cases.

You should seek professional advice if you receive a Follower Notice or APN, or suspect that HMRC may issue one – this should be independent of the scheme promoter.

Scotland Debt Solutions works on behalf of residents in Scotland, and can offer the guidance you need in this stressful situation. We have vast experience of dealing with HMRC, and with five offices around Scotland, can arrange a free confidential meeting to discuss your situation at your convenience.